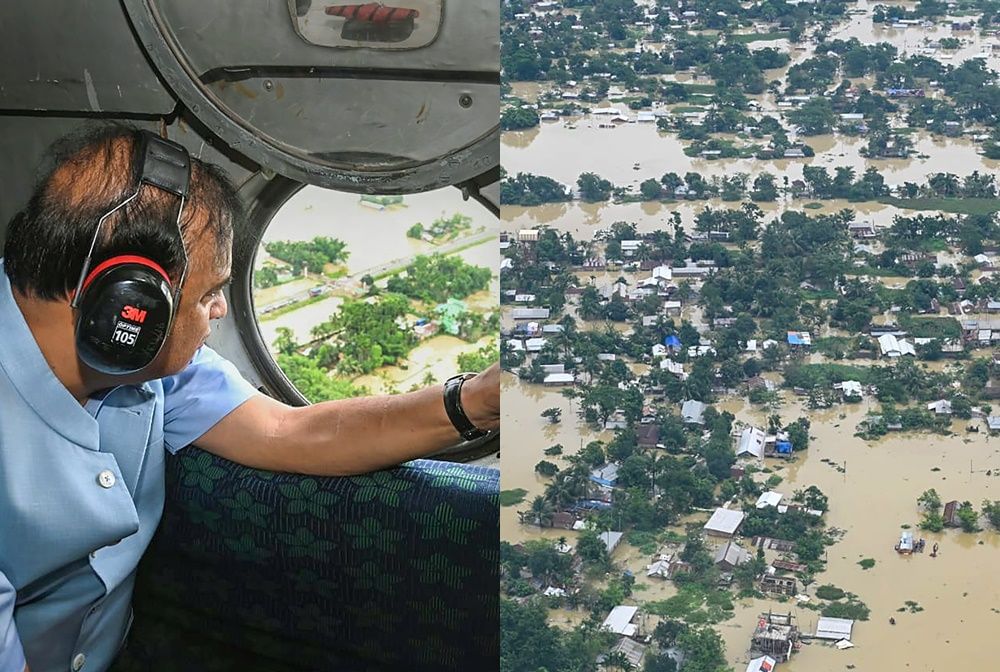 Another 7 people have died due to floods in Assam

Flood in Assam (Assam flood) Also on Thursday the situation was critical and with another seven dead, a total of 108 people have so far lost their lives in the disaster. Chief Minister Himanta Vishwa Sharma conducted an aerial survey in the flood-hit city of Silchar. According to the Assam State Disaster Management Bulletin, the number of flood victims has come down. The floods affected 45.34 lakh people in 30 districts and 54.5 lakh people in 32 districts as on Wednesday.

Prime Minister Narendra Modi said the Center was constantly monitoring the flood situation in Assam and was working with the state government to provide all possible assistance to meet the challenge. There are Army and NDRF teams in the flood affected areas. They are taking supportive measures and helping the affected people. The IAF operated more than 250 aircraft as part of a rescue operation.

Meanwhile, 108 people have been killed in the state since mid-May, one each in Kachar and Barpeta and one each in Bajli, Dhubri and Tamil Nadu districts. The Brahmaputra and Barak rivers and their tributaries flow through most of the affected districts. In some places, however, the floodwaters receded. The death toll from floods in the state in mid-May has now risen to 108, officials said.

After conducting an aerial survey and reviewing the flood situation in the Barak Valley area, the Chief Minister announced that more troops would be sent to Silchar to rescue the people trapped in the floods. “The NDRF, SDRF, Army and other agencies are taking supportive measures,” Sharma told reporters outside the deputy commissioner’s office after a review meeting in Silchar, Kacher district. But more troops are coming tomorrow to rescue those trapped. He did not say how many troops would be deployed in the work. The three districts of Barak Valley, Kacher, Karinganj and Hailakandi were severely affected. More than six lakh people have been affected as the Barak and Kushiyara rivers are flowing beyond dangerous levels.

The situation in Barpeta is very bad

Authorities said the worst situation was in Barpeta, where 10,32,561 people were affected by the floods. 4,29,166 were affected in Kamrup, 4,29,166 in Nagaon and 3,99,945 in Dhubri. Meanwhile, summer holidays were announced a week in advance for schools in the state due to floods. Holidays will be from June 25 to July 25, Education Secretary Bharat Bhushan Dev Chowdhury said in a notification. Prior to this, the period from July 1 to July 31 was fixed.

Amid the buzz that Boris Johnson is leaving today, News18...

Payal Rohatki who revealed mehndi before her wedding to Sangram Singh; Blackpink will...

Popular celebrity couple Payal Rohatki and Sangram Singh are all set to get married. The duo is set to tie the knot on...
Read more

Maharashtra (Maharashtra) . Telangana is a border state. But there is a big difference between the government schools in both the regions....
Read more

India vs Pakistan: India-Pakistan duo next month? Find out when … | ...

Aurangabad : The basic rate of water supply in Aurangabad city will now be Rs. 2025. The decision to increase or even reduce...
Read more

Sometimes some events are a bit strange. It is the smallest reasons that bring a person's life. Even if it is a...
Read more

Happy chocolates day 2022: There is a day for mouth-watering chocolates too! Learn...

Happy chocolates day 2022: There is no one who does not like chocolate. From children to adults, chocolate has left an indelible mark...
Read more

Drug case on Albion Street in Paisley sees police seize £800.00 of ‘cocaine and...